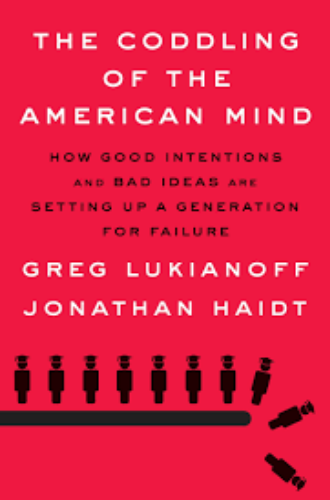 While this is not a traditional parenting book, this book contains a lot of information that I believe Modern Parents need to know to raise confident and wise young adults.

These authors argue that once kids enter college, they are not prepared to consider new and/or differing ideas, which is a cornerstone to higher education. We have to be able to consider ideas critically before we can adopt them or reject them, but college kids are increasingly asking for “safe spaces” that protect them from different points of view and posting online complains regarding professors who introduce controversial ideas in the classroom for debate (creating a “call out culture”).

Their recommended solution is that Modern Parents need to raise kids that are anti-fragile (what doesn’t kill you, makes you stronger), trust reason over feelings, and who are not afraid to adopt a point of view and respectfully enter into debates regarding this point of view.

A very fascinating read for sure!

This is my book summary of The Coddling of The American Mind. My notes are informal and often contain quotes from the book as well as my own thoughts. This summary also includes key lessons and important passages from the book.