The Secret To Changing Your Child’s Bad Attitude 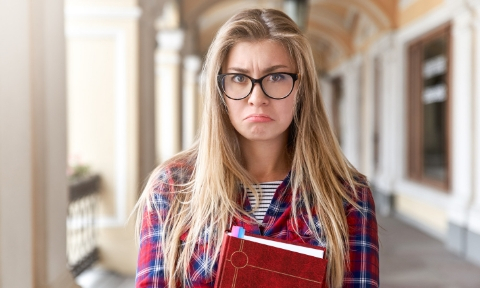 I was a child who had a bad attitude for most of her childhood.

I was born with a predisposition to get my feelings hurt easily, lash out in anger almost instantaneously, and I had an unrealistic expectation that I should get my way all of the time. As you can imagine, I was not a very pleasant child to be around.

As a young child, I had enormous temper tantrums when I became angry. My mom and my sister can tell you story after story of times when I ruined family adventures, holidays, and celebrations with one of my legendary tantrums. My parents handled these situations by resorting to spanking or sending me to my room; however, my bad attitude persisted.

**NOTE** I do not believe in spanking as a discipline strategy, but I was spanked as a child.

As I grew into a tween, I remember feeling frustrated that people didn’t seem to like me – but they did appear to like my older sister. I did have friends my own age (including an awesome childhood best friend), but I remember getting my feelings hurt by extended family members when they would lavish tons of attention onto my sister, but not on me. Looking back, I totally understand why this happened – my sister was so sweet and nice and FUN to be around, but I was the total opposite of this.

It wasn’t until I was 12 or 13 that things changed for me. I even remember the exact instance when my life turned around. This happened during a family celebration at our favorite Mexican restaurant. We were sitting at a long table in the back of the restaurant celebrating something (I can’t remember what). My parents, sister, grandparents, aunts, and uncles were all there, so it was a large celebration.

Everyone was talking, laughing, and having a good time with each other. Everyone except for me. I was sitting there at the end of the table in a bad mood with everyone turned away from me talking happily and animately to someone else.

I remember feeling that all too familiar mixture of uncomfortable emotions that seemed to plague me at that age. It was such a range of emotions too. I was angry all the time (I’m not sure I really knew what I was angry at), frustrated that no one seemed to care about my anger, jealous that my sister was so well liked, and confused as to why this same situation kept happening over and over again.

It was at that dinner table that I finally realized that my bad attitude was the reason people didn’t like me, and the only way to make my family like me was to act more like my sister – to talk to people, laugh with them, be silly with them, and to not take things so personally. I remember feeling scared to try something new, but I did it anyway – I turned to my aunt Darla sitting next to me and started talking to her and I noticed that she started treating me the way she treated my sister.

It worked! It was like a lightbulb went off in my head. That was the day that I left my bad attitude in the dust. I don’t think many people would describe me as having a bad attitude today.

So it’s no surprise that one of my kids inherited my bad attitude, but, thankfully, his attitude is not nearly as bad as mine was. My 17-year-old son also seems to have been born with the same negative personality that I had as a child.

Patrick never had huge tantrums like I had, but he tended to view life on the negative side. For instance, as a child, he never wanted to go on family adventures, but once there, had such a great time that he would get mad that we had to leave when the adventure was over. When asked if he liked a meal, gift, or something else pleasant, he would never tell you he liked it – but he would tell you what he DIDN’T like about it. We couldn’t joke or be silly with him because he would take it personally and get angry. Life is merely acceptable to Patrick, never great.

When Patrick was younger, I put a lot of energy into trying to please him. As a toddler, I thought that if he had a good night’s sleep, a morning nap, and a full tummy he would want to go on a family adventure. Nope! That didn’t work.

As an older kid, I would try to make him happy by surprising him with a special dessert or toy, but the surprise was never quite what he wanted. I was always left feeling disappointed and sad – and feeling like a bad parent because I couldn’t make my son happy.

As Patrick grew older and struggled with his own negative attitude, I couldn’t help but remember my bad attitude as a child and how things finally turned around for me.

There was nothing that my parents could have done to change my attitude for me – I had to decide to do that all on my own. It helped that they created an environment that ENCOURAGED my desire to change. For example, my parents were great at NOT giving in to my bad attitude or trying to overcompensate in pleasing me.

They created boundaries for me that stipulated that if I chose to happily participate in family activities then I would be rewarded with positive attention from them.

What’s important to note is that if I chose to have a bad attitude during these times, then my family went on having a good time in spite of my attitude. They would follow through with my consequence (putting me in my room or ignoring me), but they would still engage in the family activity and have a good time.

I followed the same game plan for my son. When Patrick’s negative attitude made an appearance, I would try to maintain a positive, happy tone in spite of it. Once I realized that nothing I could do would satisfy Patrick in the way that he wanted, I gave up trying; instead, I went about planning fun, positive family activities that I felt were best for my family. If Patrick had a good time, then great. If he had an “ok” time, then that was fine for me too.

I have seen a huge shift in Patrick’s attitude over the past year or so which makes me think that he has finally hit just the right maturity level to decide to adjust his attitude. I say this because I have noticed that it is a lot easier to be with him lately – he laughs with us, participates willingly in family activities, and is able to joke around with us.

I had such a good time bonding with him this past July when Patrick and I attended the Star Wars Celebration weekend in Anaheim, California together. He was so appreciative, funny, and easy-going during this trip – so different from his younger self.

Of course, as a parent, I wanted a magic parenting “trick” or some special words to change my son’s attitude overnight. For a while I even bought into the hype that if I was a “good enough” parent, my child would not have this kind of attitude.

However, as I matured as a parent, I realized that my son would not be changing overnight. I put my psychological training to work and practiced positively reinforcing the behavior and attitude that I wanted him to continue, and ignored or provided consequences for the behavior that I did not want to see continue. This created an environment that encouraged Patrick to change his attitude on his own – and when he hit just the right maturity level, he was able to make this change.

Therefore, the take home message here is that if you have a child who seems to have been born with a bad attitude and you are prepared to put in the time and patience necessary to create the right environment that encourages change, then I believe that your child WILL change when he or she hits the right maturity level. I wish I can tell you exactly when that maturity level will hit, but it happens at a different time for each child.

All you have to do set the bar for your child, and they will rise to the challenge when the time is right.

Take it from a recovered bad attitude child 😉

What To Do When You Mess Up As A Parent
Rule #3: Love It Or Hate It, Technology is Part of Modern Family Life
How Smart Modern Parents Make The Holidays Special For Their Families
Four Signs Your Teen Is Avoiding Adulthood
The 5 Steps To Getting Your Child’s Behavior Back on Track

[VIDEOBLOG] The #1 Reason That Keeps Parents From Being Consistent
How To Make Family New Year's Resolutions
When You should Pay Your Child For Completing Chores (And When You Shouldn’t), According to Psycholo...
6 Ways To Know That You Are A Good Parent (And 6 Ways You Can Improve)
What To Do When You Mess Up As A Parent